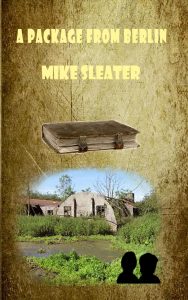 A Package from Berlin, my third novel has been withdrawn from Amazon by their internal censors. Apparently they felt that it may upset some German readers and so they took it off the European market.
I have re-published it and I have also changed the cover which may also have been an issue.

Hopefully Mrs May is working it into the Brexit negotiations and I can only hope she can do better than she did with the Northern Ireland deal.