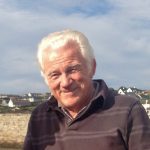 Mike is now officially a Grumpy Old Git.
Many would say he's always been a grumpy git.
Just ask his grand kids. They know the grumpy sod for what he is.

He doesn't want to write his life story but here's the potted version.

1942 - Born in Manchester during the war and sent back to Sligo on the west coast of Ireland, where he was supposed to have arrived.
The Second World War had started properly, shooting and stuff, so his mum said he should get out of the way of the Luftwaffe and their noisy bombs.
That picture on his contact page was the place where he grew up.
Much more peaceful.

1947 - Education called, and he arrived back in Manchester where patient teachers tried to fill his empty head with the stuff that should get him some work when he grew up.
This must have worked to some degree as he managed to keep some many jobs he tried. Draughtsman, designer, instrumentation engineer.

1980 - Set up and managed a number of companies each failing to rake in the millions. An employment agency, a ceramic tile distributor, a computer rental company;

Despite spending over three years in Belgium and Holland as well as travelling back and forwards to Spanish and Italian tile factories, none of his efforts proved to be successful.
1963 - He married his long-suffering wife, Anne, who managed to help him navigate his attempts to be a multi-millionaire and is still looking after the daft old bugger.

He started writing some years ago, but it's now that he's retired that he finally decided he should try to add 'Best Selling Author' to his resume.
We've all tried to make him see sense but, as usual, he's not listening.
Hey ho!